When the cloud computing is concerned we used to think about rapid elasticity, resource pooling or broad network access. All the points are valid but what about security? Is it really safe that data is loaded somewhere off the premises? Are all the legal rules met as well? Lyftron supports many nice features: one of such features is data encryption.

The untrusted connection is defined in Lyftron as a target which the data cannot be pushed to “as-is”, but encrypted beforehand. Lyftron automatically encrypts the data for you while keeping the data types untouched. String data after encryption is unreadable, but numeric data remains similar to the original data. A few key points for data encryption in Lyftron :

Let’s create a virtual database called ADW_source and import its metadata (you can read about it in the previous post: “How to integrate disparate data sources in 10 minutes”). First, we create the virtual database itself:

Our new target connection is on the local network, thus let’s treat it as trusted. Data processed using trusted connection is not going to be encrypted. 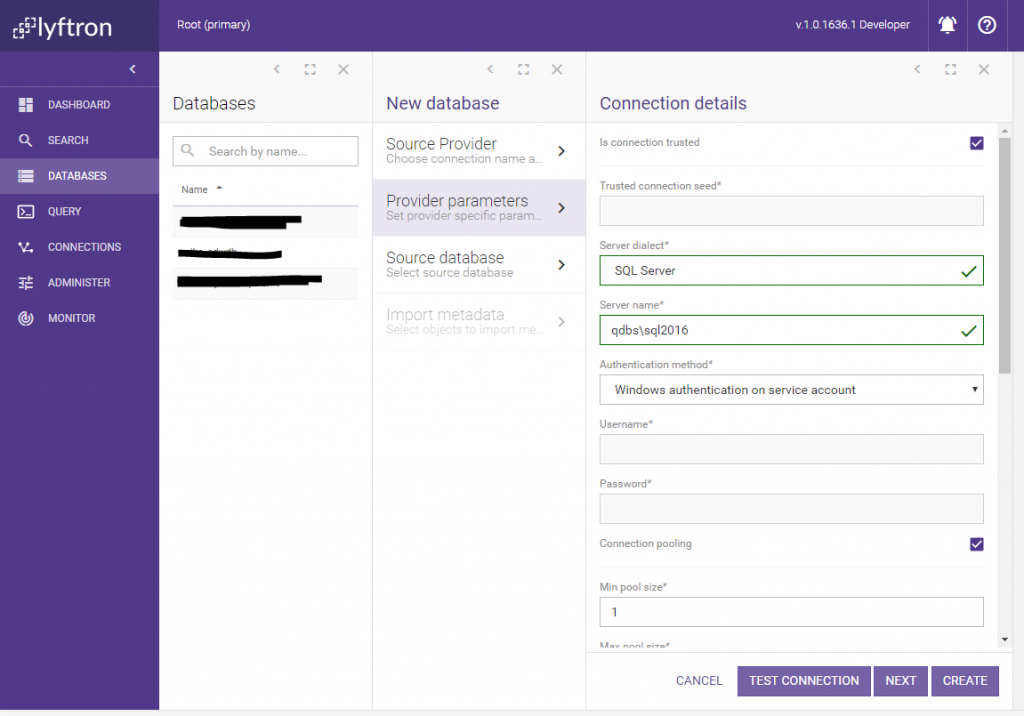 We need only one table metadata to be imported. We use FactCurrencyRate in our case: 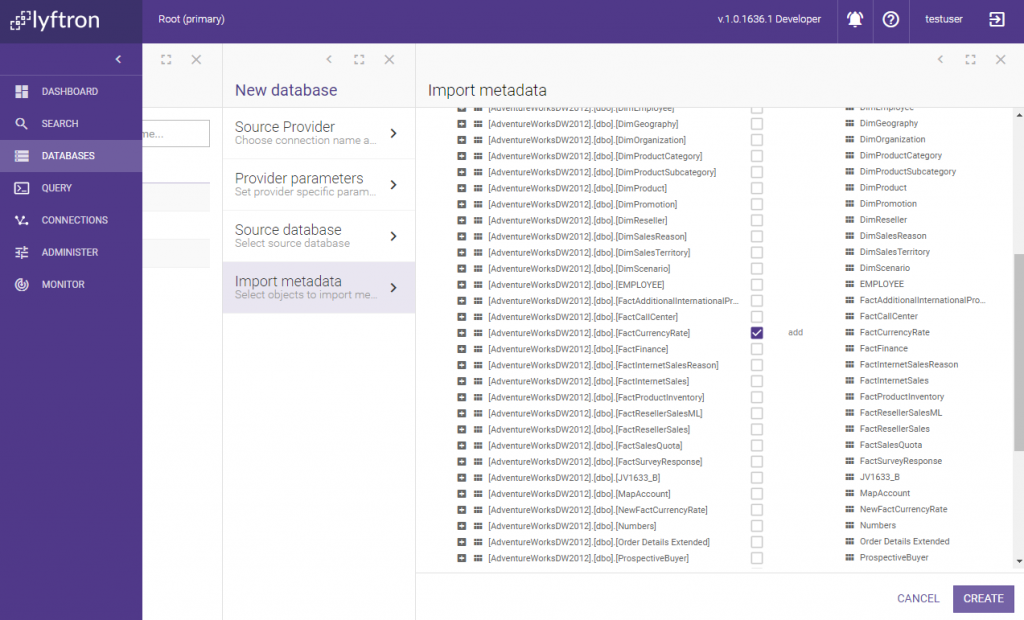 Our virtual database was created:

Next step is to add a virtual database that we will use for data caching and processing. We will use Azure SQL Data Warehouse database hosted in Microsoft Azure cloud.  The new database name will be AzureDWCache_source. 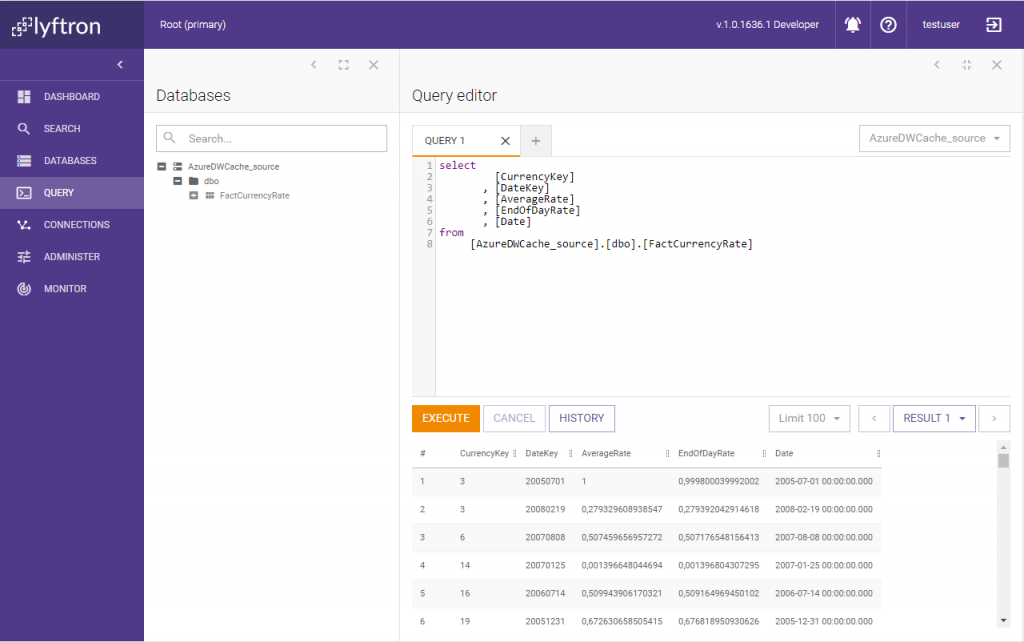 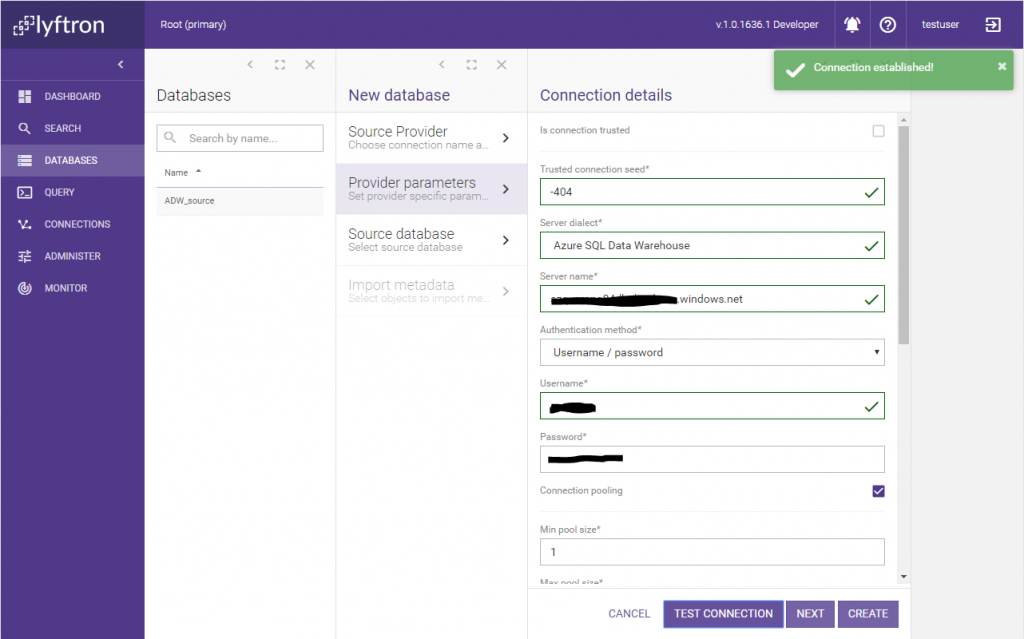 We have no need to import metadata from the AzureDW DB, because we will instruct Lyftron to use that database to materialize view data. Finally, we have two databases: source with one table, and the target with no tables:

Now, before table FactCurrencyRate is cached in the Azure cloud database, we need to mark a few columns as sensitive. Let’s go to the source table column list: 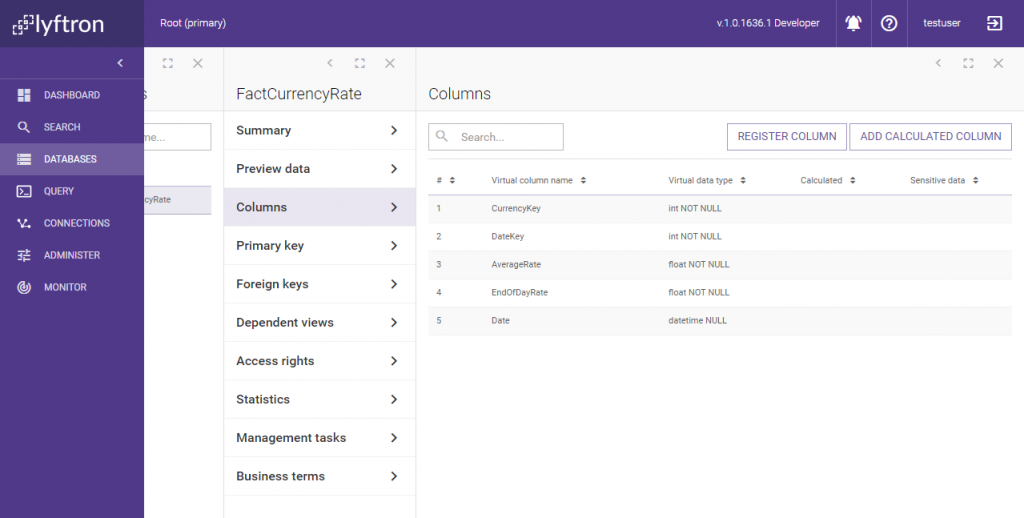 We want to mark some column as containing sensitive data. We set column  AverageRate property “Contains sensitive data” to true and save our changes: 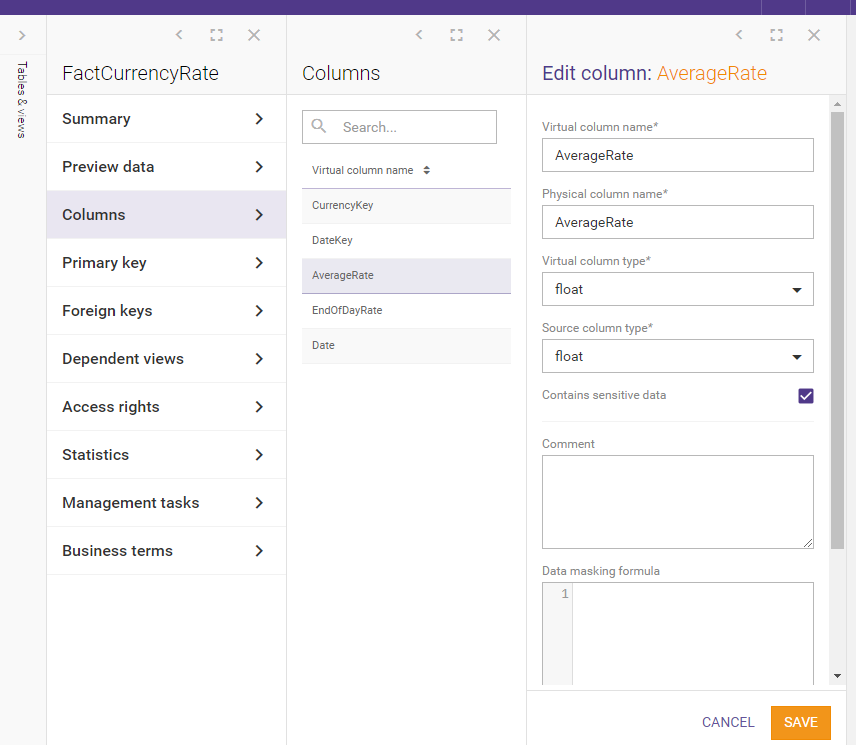 We do the same for EndOfDateRate and Date columns. All three columns which hold data marked as sensitive are as follows: 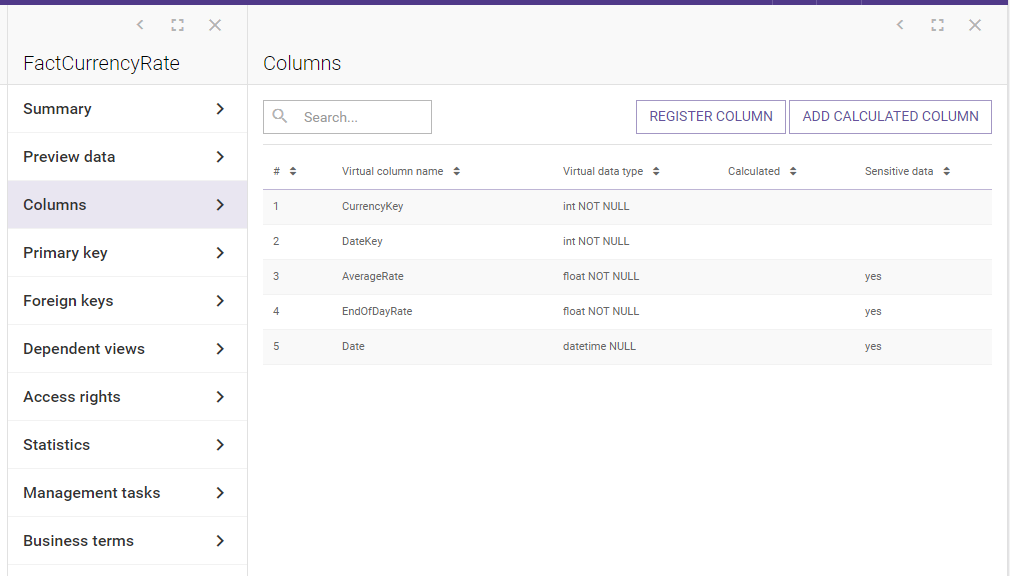 To encrypt cached data on AzureDW we need to create a view in AzureDWCache_source DB. To do so we go to the database properties, open Tables & views and click Generate views menu item. We select ADW_source as the “Source database”. We’re going to import one table:

There is one table to import. 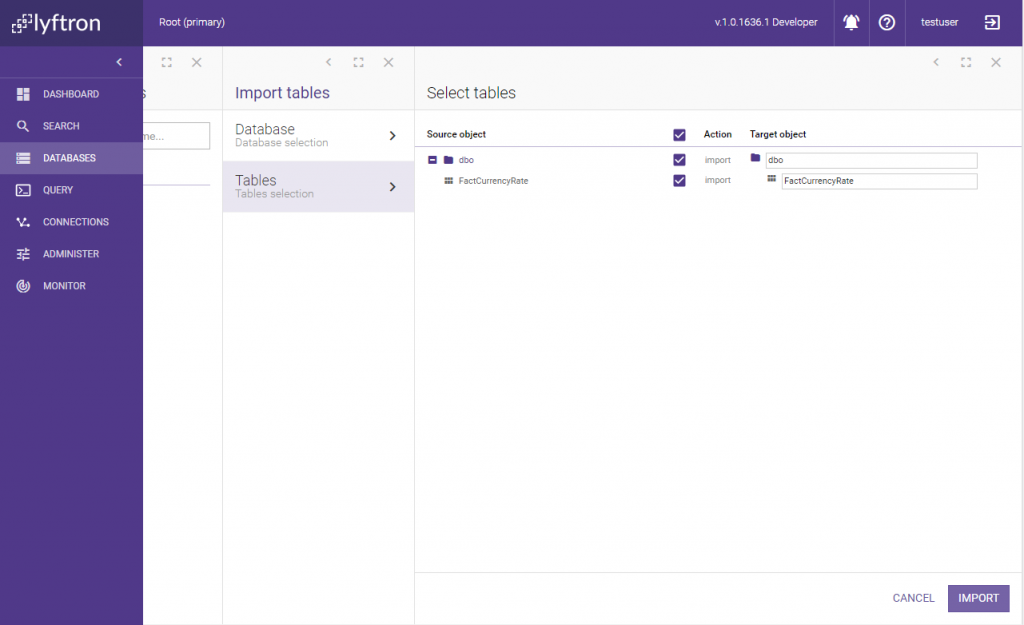 Now, AzureDWCache_source contains the desired view. What about the column sensitivity information? We have marked columns in source virtual database as sensitive, this information should propagate further and affect sensitivity setting of the columns in the view, right? Let’s check this out:

To make data cacheable we need to set a proper caching of the view. We select caching strategy to use one physical table: 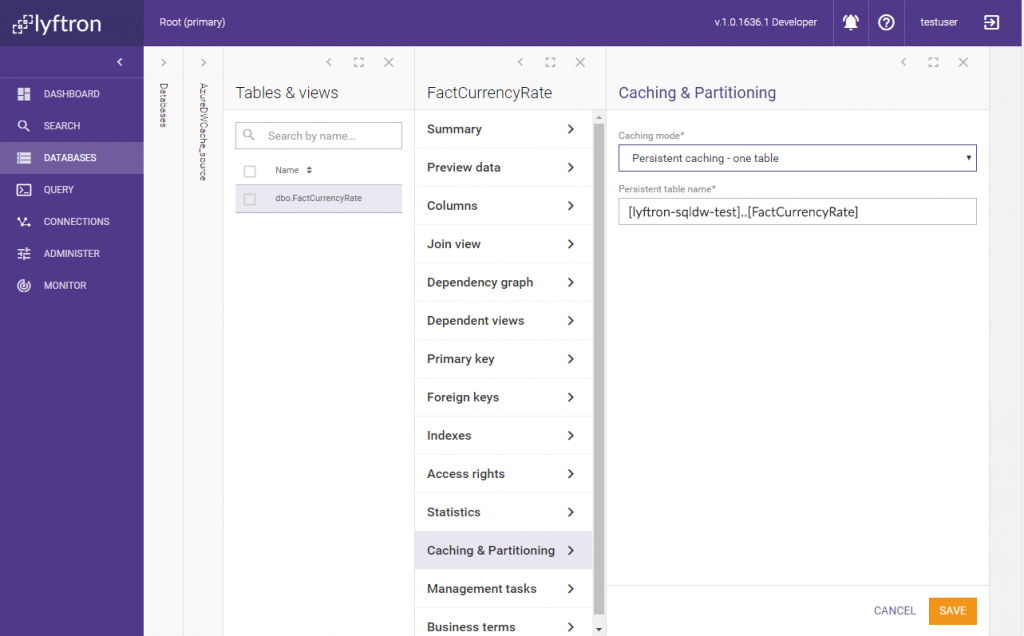 When the source, the view and the caching mode of the view are set, we can build the cache for the first time. To do it we enter Management tasks sub-view and run Rebuild persistent cache task: 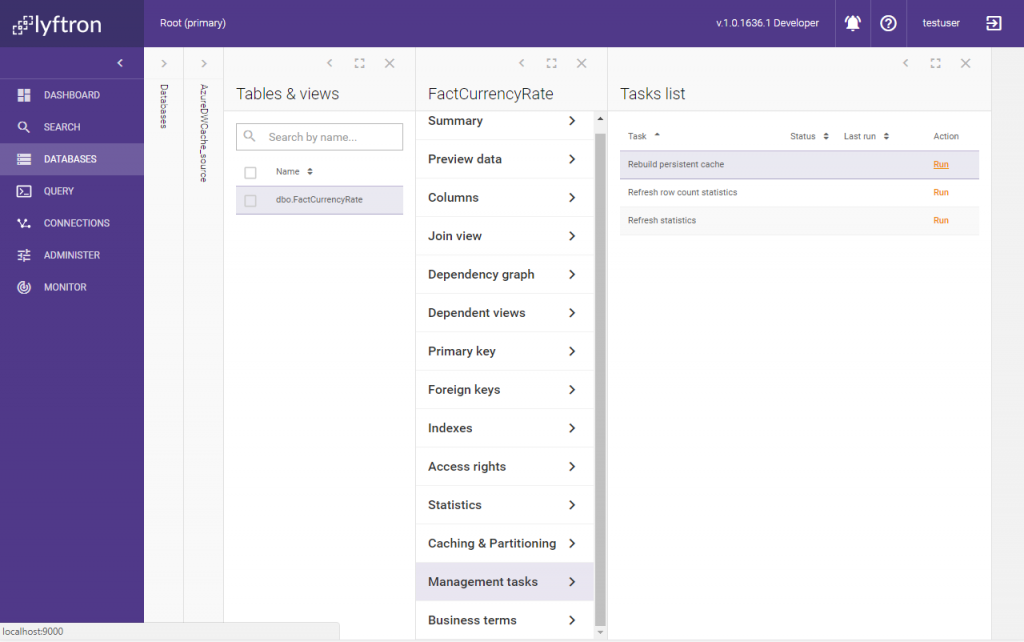 When the task is finished we check Caching & Partitioning for details: 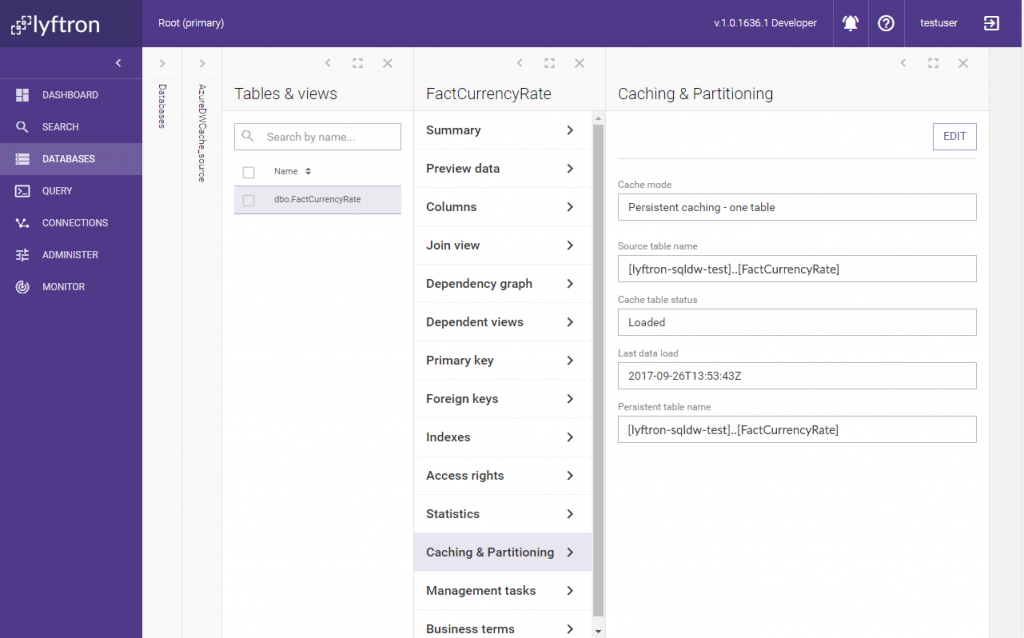 We see that cache was created and loaded. Now we know that the data is cached in the SQL Data Warehouse database in Azure. What about the cache contents? Let’s check our cloud database and connect to it directly using SQL Server Management Studio:

As you can see there is a table created named FactCurrencyRate that holds our cached data. But the data inside is different than original one coming from ADW_source database – columns AverageRate, EndOfDayRate and Date contain data which looks pretty similar to the original, but actually, only the format is the same. How Lyftron handles querying such a cached view? Let’s go back to Lyftron and check by executing the query below: select [CurrencyKey], [DateKey], [AverageRate], [EndOfDayRate], [Date] from [AzureDWCache_source].[dbo].[FactCurrencyRate] using Query editor and see the data.

Data displayed is the same as the original, as no data encryption was performed…

NOTE: There is also another way, more advanced, to check if the query was actually performed against the new table. This feature is called Execution plan cache and for sure will make you in love with Lyftron even more, so… stay tuned to Lyftron !

OK, you might think that Lyftron does not reverse the data encryption and gets the data directly from the source database rather than the cache in the cloud. Let’s kick the source database out of the system and delete ADW_sourcedatabase. Now the only one database left is the one based on Azure SQL Data Warehouse:

Let’s do the final check and query the cached view again:

Wow, it still works! Data looks familiar… In this article we have shown:

Thank you and keep virtualizing!

What is Governed, Self-Service Business Intelligence and Why is it Important?

Looking for the latest on data integration, cloud, data governance, and more?

Don’t miss out! Sign up for our newsletter to get all the information you need.

You will be re-directed to G2.com on the another tab. Please click on the “Access Grid Report” button present on the right side box to get the report as shown on the screenshot below. 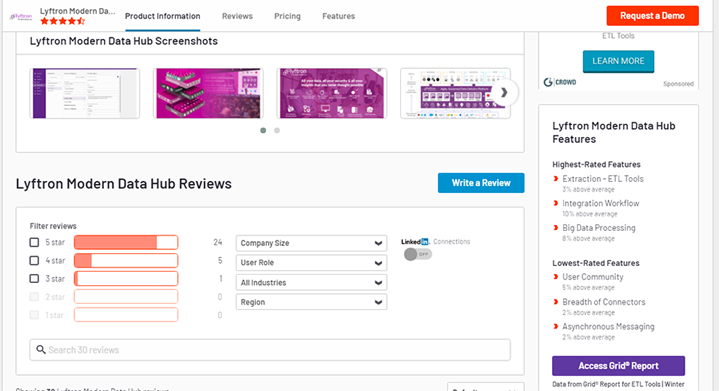